Born in 1956 into a music family of three generations in Hanoi, Vietnam. She is one of the few traditional artists left who have the passion, talent and devotion to preserve the treasure of Vietnamese traditional and folk music. Beginning her music career with the classical violin with which she graduated at the National Conservatory of Hanoi (now the Vietnam National Academy of Music), she went on studying several traditional music genres and singing styles of Northen, Central and Southern Vietnam with national leading artists, most notably “Ca Tru” with Quach Thi Ho, “Cai Luong” and ” Hat Van” with Kim Sinh. During her 40 years of music career, she has won many prizes and was awareded in many national Festivals for traditional and folk music. She was often invited to perform in China, Malaysian, Laos and Cambodia. 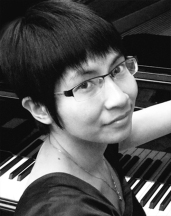 Born in Hanoi, Viet Nam into a music family and started to learn music at the age of 4 with several Vietnamese traditional instruments. She went on studying Piano for 12 years at the Hanoi National Conservatory before receiving a full government scholarship to study at the Royal Conservatory of Brussels where she earned both her Bachelor Degree and Master Degree with Distinction. After several years playing and experimenting in the Free Improvisation Ensemble of the Brussels Conservatory lead by composer Kris Defoort and other Belgian Improvisation Ensembles, her interest in improvisation and contemporary music keeps growing, she currently pursues the Master of Contemporary Piano Music in the Hochschule für Musik und Tanz Köln with Prof Pierre-Laurent Aimard, and Improvisation with Paulo Alvares and Frank Gratkowski.

As a chamber musician,she has earned experience with Ensemble Modern Frankfurt in Klangspurren Festival, with Sebastien Vichard (Ensemble Intercontemporain) and Philippe Manoury in Ircam Paris@ManiFest, with Ensemble Klangforum Wien during Impuls Festival, and International Kamermuziek Festival Schiermonnikoog in the Netherlands. Forming a duo with a classical tenor, she also received a scholarship to pursue the prestigious Intl. Lied Masterclasses Udo Reinemann.

Currently she engages also in conceptual and free Improvisation, notably with project Osmosis at Strom Festival Koeln 2013 and dedicates her performing work increasingly in cross-disciplinary projects. She is a founding member of ensemble Moment! and ensemble Parallel Asteroid.

At the age of six Gregor started playing the flute and clarinet. Soon he discovered the saxophone and fell in love with jazz music. For several years he studied classical and jazz music in his hometown Vienna, Austria.
In 2009 Gregor moved to Brussels to study with John Ruocco at the Royal Conservatory of Brussels. He performs music of many styles, playing in bands such as Alegria, Einsdreizweivier, European Free Trio, Octet Red, TsuTsu Trio, Les Chroniques de l´inutil, The Unrevealed Society, Jens Mauritz Orchestra, The European Saxophone Ensemble.
He participated in diverse artistic projects. Some in cooperation with performing artists, dancers and actors, others in ensembles rooted in the tradition of jazz and large ensembles crossing the boundaries between classical and improvised music.
Gregor has had the opportunity to performe with musicians from various countries and diverse cultures such as Austria, Begium, France, Portugal, Italy, Germany, Luxembourg, Slovenia, Hungary, Israel, England, USA, Taiwan, Venezuela, Nigeria, Ghana, Burkina fasu…
His main instrument is the saxophone, besides that he plays the flute and clarinet. Gregor composes and arranges music for small to large ensembles.

Sergej Maingardt graduated from the University of Applied Sciences with a B.Eng. in Media Technology and has a M.A. in Media and Cultural Analysis from Heinrich Heine University Düsseldorf. He is studying electronic composition with professor Michael Beil at the Univeristy of Music and Dance Cologne. The tension between his activities as a composer and as a scientist is an important aspect in his music. His interests are influenced by modern technologies as well as the way they change human perception. In his works he explores the limits of aesthetic principles of the contemporary music as well as those of aural cognition. In addition to his solo projects, he collaborates with video artists, choregraphers, and pop artists. He runs his own music label RadioFizz, which concentrates on production of contemporary popular music.